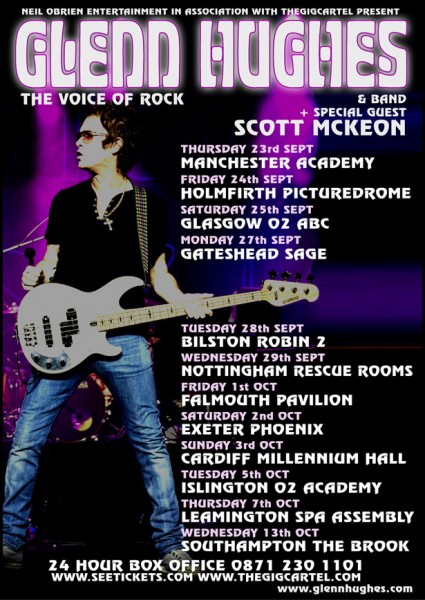 “I’m proud of my heritage, and the UK fans have always been the most supportive and receptive to me and my music,” says Hughes.  “I’m thrilled to embark on what’s possibly the most extensive UK solo tour of my career. I’ve just made an album that I am extremely proud of with Black Country Communion, and until that band goes out on the road, I’m channeling all the power and energy from the BCC experience, into these dates. I’m a lean, mean rock machine.”

Fans can expect a diverse selection of classicsongs from Trapeze, Deep Purple, Hughes Thrall and Glenn’s solo albums, with an emphasis on performing some new, interesting selections, including some that have rarely/never been played live before.

A complete set list has not been determined as yet, but some songs have been decided upon, and they will really set the tongues wagging, feet stomping and bodies groovin’.

Hughes is known for his distinctive style that effortlessly blends the finest elements of hard rock, soul and funk. He’s worked with everyone from Black Sabbath’s Tony Iommi, the KLF, members of the Red Hot Chili Peppers and more recently with Jason Bonham and Joe Bonamassa for his new rock supergoup Black Country Communion.

He is hailed by millions as one of the last of the truly great British classic rock vocalists of all time. So much so, in fact, that Glenn has been asked to sing with Heaven and Hell at the High Voltage festival in London on Saturday July 24th, in a tribute to their front man, the late, great Ronnie James Dio. Lifelong friends, Ronnie often cited Glenn as his favourite male singer, so it is only fitting that the Voice of Rock will be singing in honour of the Voice of Metal.

In keeping with the tradition of the classic British hard rock vibe that he has focused on with Black Country Communion, Glenn’s new solo touring band has a harder, more direct rock approach than previous incarnations.  The upcoming solo tour promises to be an exciting and powerful showcase for the Voice of Rock.