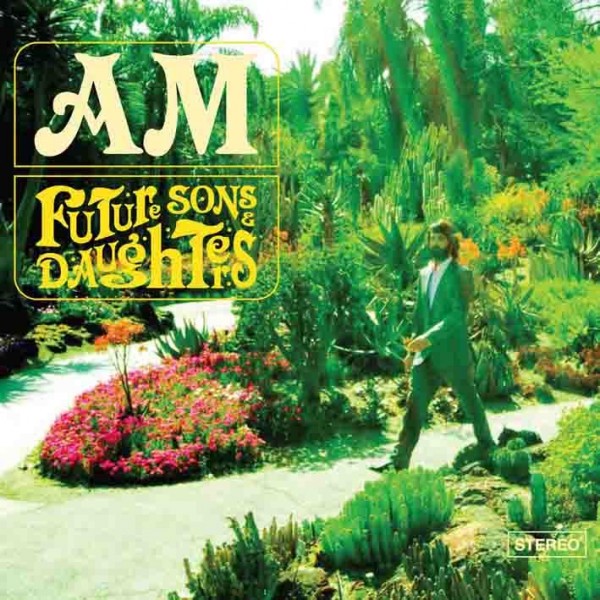 A lot of musicians pay lip service to having a plethora of far-flung musical influences, but then you listen to their music and it sounds like they’ve done their best to avoid them at any cost. Citing artists as diverse as Jorge Ben, Brian Wilson, Sergio Mendes, and Curtis Mayfield, AM’s first UK album – ‘Future Sons & Daughters’ – truly delivers on the sum of its parts.

AM – born in Oklahoma, raised in New Orleans and currently making a home in the Los Angeles neighborhoods of Silverlake and Echo Park – releases ’Future Sons & Daughters’ in the UK on August 30th.

At times sounding like Jim James of My Morning Jacket singing his way through Beck’s lost album between Mutations and Midnite Vultures, the record brings together the best of musical worlds, rippling through classic roots sounds: AM pop and rock, steamy soul and R&B, Brazilian tropicalia, British Invasion, and ‘60s Bay Area psychedelia.

Growing up in New Orleans exposed AM to a melting pot of cultures that inevitably influenced him; whilst working in a record shop, he was taught how to play guitar by local musicians and began playing in bars by the age of 15. Returning to New Orleans several times a year to see his family, this Halloween will see AM play the Voodoo Festival when he takes to the main stage the day Muse headline.

Although immersed in the sounds of the 60s and 70s, AM doesn’t echo the pop hits of past; instead ‘Future Sons & Daughters’ is a tantalizing glimpse at a promising future-pop. Recorded and produced by Charles Newman (Magnetic Fields), the record represents the full flowering of AM’s singular gifts: from the warm, sepia shaded hooks of album opener ‘A Complete Unknown’ (with its addictive “Back and Forth” refrain) to the soaring vocals and softly picked guitars of ‘Darker Days’.

The first single from the album ‘Self Preservation’, due for release on July 26th is a tale of survival instinct kicking in; it showcases the political and cultural commentary of AM’s lyrics as they melt into West Coast, sunshine melodies – “It’s hard to turn this around / But like the leaves change / We just have to rearrange / In order to survive”

AM didn’t make the album alone, however: “The band really delivered on this album,” he says. “Before we got together to go over the songs I made everyone in the band a hand-picked playlist of everything I had been digging on in the last year: obscure Italian soundtracks and Brazilian music, psychedelic Turkish folk, deep cut soul and groove.”

Currently on tour with the French electro-pop duo AIR, AM also supported Charlotte Gainsbourg on her North American tour and opened for acclaimed Brazilian songwriter Caetano Veloso in LA earlier this year. AM also performed at SXSW Festival and the 2010 Sundance Film Festival earlier this year.

Watch the video for debut single ‘Self Preservation’ here: