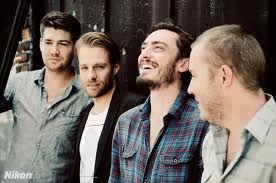 Alternative rock band Civil Twilight are a quartet from Cape Town, South Africa. Now Nashville based, they’ve developed their career as a progressive live act and are often compared with U2, Radiohead, and Muse.

The upbeat and catchy Fire Escape, with its funky, pulsating bass lines, crashing drums and intricate electric guitar work has a contrasting style to It’s Over, a slow and softly atmospheric piano track. In River a light, acoustic riff is added to a vigorous drumbeat. Letters From The Sky is a rather abstract but fresh and innovative love story whilst the inward looking Sweet Resistance is moody and subdued.

Civil Twilight uses electronic drum beats, vocals, and synthesizers to create bass driven rock and ethereal piano ballads. They’ve departed from the character and personality of their first album but remain rich, playful and confident. Mostly they succeed in their aim “to make people feel good and get them to a good place every night.”