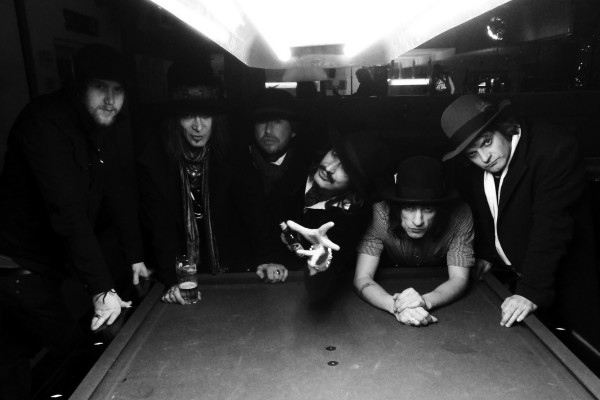 The Peckham Cowboys (as most fans know by now) came into being during an impromptu jam session at Guy Bailey’s house in Peckham on the occasion of his birthday a few years back. There followed a number of other “fun jams”, which were really an excuse for us all to get loaded for a few days and nights and have a laugh with some musical creativity thrown in… After a while we realised what we’d been writing was pretty good – or pretty awful – whichever way you choose to look at it, and so we decided to make an album. This “project”, if you like, was nick-named The Peckham Cowboys by singer Marc Eden, because it happened just off the Old Kent Road which was where half the subsequent live-band lived at the time. Marc also described the resulting shenanigans as sounding like Steptoe and Son on crack…. which weren’t too far from the truth.

Everyone in The Peckham Cowboys has had “previous” bands… the members have been in such bands as The Quireboys, The Dogs D’Amour, The Izzy Stradlin Band, Hanoi Rocks, Primal Scream, The Project – that latter became known as Velvet Revolver… so we’re all old whores who know the score. As far as influence goes, we’re influenced by everything and anything that we’ve heard that we like – consciously though, The Cowboys only direct influences are those of spirit rather than sound – and that is plain enough for anyone to hear – if you have “those sort of ears”.

Today is the release of our second album 10 Tales From The Gin Palace (Livewire/Cargo Records). It follows our debut Flog It! (also on Cargo). Both albums have been critically acclaimed, but …Gin Palace seems to have caused a huge stir, with reviewers describing it as “a rock n roll triumph”, “a masterpiece”, “the best new album in decades” and many other such marvellous things. Personally, me and Marc reckon it’s alright – if you like that sort of thing.

Cowboys’ live shows are always edgy affairs – there is always the feeling of “is this going to come crashing down at any moment?”…. the crowd picks up on that, but because there is such a pervading wit and cheeky sense of fun in it all then they bowl along for the ride – as is only right; this is an inclusive club – not a platform for rockstar-wanker-antics. Everyone has a blast – even if we fuck up what we’re playing, no one cares – all the right notes were there, just maybe not always in the right order. Every tour we’ve done has been imbued with that attitude – that, and the desperado attitude that comes from being penniless and wondering whether you’ll get paid that night and paid well-enough to buy fuel to get to the next show….. 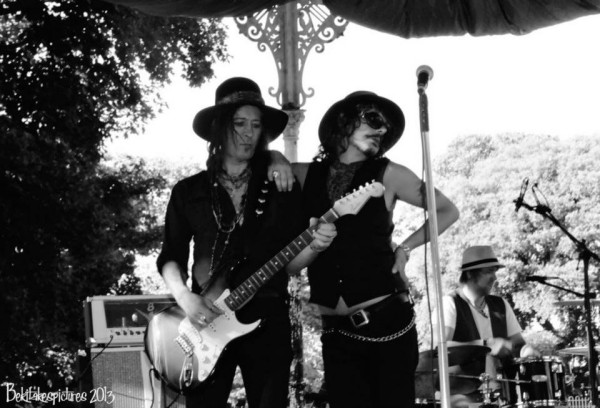 The Peckham Cowboys came together by accident – or even by mistake, to quote Withnail, and so there is little contrivance and people get off on that because they can relate to it. The wit that is present in Marc’s lyrics and in the whole tongue-in-cheek presentation of the band is also a big thing that people can relate to – they know full well they can come and have a drink or ten with us after the show and have a laugh and take the piss if they feel like it – a collective, shared thing – at the risk of sounding like a hippy. As for the music: well it’s new and exciting and no-one else is doing anything like it right now, so of course that is going to appeal to the punters, promoters, agents and the journalists….

I listen to music on CD, vinyl, and have a gander at it on YouTube – no idea about the others in the band, although I imagine it would be similar. As far as Spotify etc goes, it is a double-edged sword…we have Cowboys fans all round the world due to these formats and therefore I’m happy for their existence, but equally so we’d be comfortably well-off blokes if we actually got paid proportionately to the amount of fans who “own” copies of our music, but we’re not – we’re fucking skint because those forums/formats pay about a billionth of a penny a pop. But this is the state of the world – there is as much use in bemoaning the fact as there is in execrating the evils of, I dunno – mobile phones or something…

Personally,I’m currently listening to stuff by Johnny Cash, Adam and the Ants, The Blue Ruin, The Brian Jonestown Massacre, And Also The Trees, The Stooges, Dirty Ray, Jackie Leven, BRMC and Madonna’s Ray of Light album. I don’t know about “new discoveries etc” (apart from The Blue Ruin) as nothing I’ve encountered impresses me more than 10 Tales From The Gin Palace – although having said that, I’ve heard that fucking thing so many times I’m presently using the CD as a drinks mat… it’s not too useful – not very alcohol-absorbent – which is odd considering the bastard was conceived in the stuff.

Well, 10 Tales… is just out – we have a tour in March to promote it, looks like some festival dates in the summer, so all is looking dandy. So as long as the members of the band don’t re-create 2013 and end up in court, hospital, the cells and further debt we should be all right…

Questions answered by: Dale Hodgkinson (guitar) of The Peckham Cowboys…

The band are touring this month: