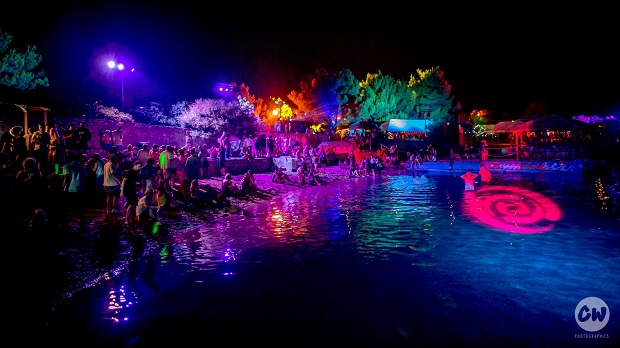 After nestling down in the little house up the island, we take a little white toy choo-choo train to the main site. No really, we did. It’s how you get about on the island. How else? Proceedings have been winding up but we arrive just in time for the man who became the backbone of our festival – Bobbafat. I’ll talk about him later though.

I have never found the bloody entrance to that festival. Always walking through bushes, climbing over the wee sheds painted pink and jumping down something to enter. It’s basically a little bubble you have to break into. Of course there’s a main entrance. How could I find it though. Catching Flies plays his ambient grooves – he reminds me a lot of James Blake and his set is chilled enough to help us breathe in the surroundings. The main stage is acoustically better than every other time I’ve been to the little Tisno site, and a perfect size for these small bubble ravers to fit into. Then, over to the sea, the beach stage is a beautiful little spot with a tiny sea enclave and a disco-balled dance floor deck overlooking it all. It is quite something to breathe in. It really is.

Now, as everyone who has been to the site will attest, the festival is the island itself. Many nights spent on the docks, the boats marinas of towns nearby and most of all the white bridge of magic. Now on this little Tisno bridge, yes, the one that helps it cling on to the mainland and stop floating away into the wild Mediterranean. On this night Jay Electronica was just hanging out with the peeps from the festival. And that’s not that strange at Soundwave, Tisno and small festivals in general – things are always small enough to feel like you know everyone there, including the guy on stage. But this time for real. Always surreal for the enigmatic Jay to be sat on a bridge that’s on your way home though. Maybe sadly for Jay though, as a London boy called Shay really didn’t stop telling him how much he could rap. “I got bars man”, “I got baaaars!”. What can I say about the enigmatic Jay, well he seems crazily down to earth, and likes that bridge that clings on to the mainland.

Friday is spent by all, it seems, soaking in rays, lilos, and G&Ts by the beach stage, listening to the de facto Soundwave residents, and although they don’t know it yet, my friends, Bobbafat, Mo Fingaz and Tom Central. Again, I’ll speak about them later. 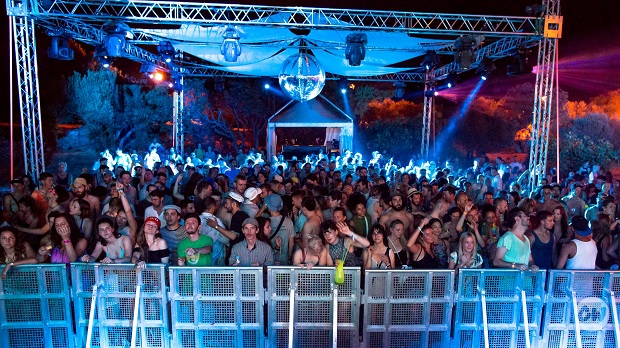 Then the big man over at the main stage. Jay Electronica delivers a set that most have been waiting for six years. With his upcoming album, its clear Jay Electronica has started to become more eclectic in his tastes, but has stayed true to his hard-hitting lyricism and beats. It’s heavy and it’s good. Half way through the show, he just stops the set. “Yo, who out here can rap? Who… out … here… can… rap?”… I looked around for the guy with bars. Where is he? Then I hear “Where ma man Shay at?” A slender figure starts to walk up to the stage and – shit(!) – he’s pulled the boy from the bridge who said he has bars for his big break. How amazing. However, all I see on Shay’s face is fear…the poor guy is whiter than a ghost and definitely not looking like he’s finding those bars he had. Jay gives him a pat on the shoulder and gives us some excuses so Shay can get out of rapping to a ton of people and elope slowly out the backdoor while the noise of a crowd cringes nearly overpowers the speakers. After the set the dancefloor stays packed for some standard ’00s hip hop and RnB but vibes are high.

As we move over to the main stage, it’s like we’ve entered a different world. Dreadlocks and arm-bands reign, as topless face-painted pixie girls get low and heavy for London’s very own Mala who, as expected, delivers a smooth serving of searing and intelligent bass. And no matter where they are from, they all get down and do the scrunched up bass-face to the master’s set.

Then a short boat ride across the sea and many stars later, we reach the after party at the famous Barbarellas. A personal favourite of mine, Alexander Nut completely smashes it, and is doing much higher BPMs then I’ve seen him do before, which, being Friday we all have the energy for it. The whole world is there, and by the end we’ve missed the last boat ride home, our phones and perhaps…our minds.

Saturday. Yes, Saturday. Saturday I fell in love. To be honest, I just overlooked Andreya Triana as another standard new pop singer…I really don’t know why, but she’s got soul, soul in a London accent. What a misguided dick I have been. She’s lovely. She shouts out to London, chills with her drummer, and then balances on the roadie’s box on wheels, in front of the main stage, where a few people gasp; she balances on this wheely box not noticing how close she is to falling off, as the wheely box moves to and fro, she unknowingly, effortlessly brings the sun down and pulls the boats in. 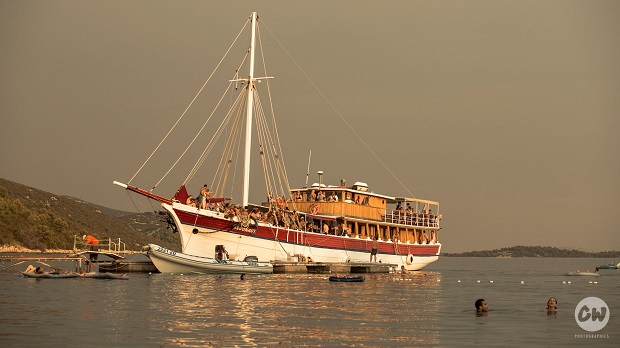 The boat coming into shore is the one in question. In it, comes DJ BobbaFat and we take it for a three hour round trip. BobbaFat kills it with a massive selection of well known, well sorted hip hop tracks, and when he starts with the grime part of the set, the boat kicks off. Have you ever been to a basement grime club in south London? Now put that on a boat on the Dalmatian coast and have some fun with it. Up pulls a speed boat…and off it: Jay Electronica. Now as if this man could give us anymore surprises he gives us a set with ’90s UK house and ’00s French electro and so much more.

By the time we see shore again, we are one big sweaty family, but over yonder beckons more goodies. It’s only Fatima,  Mr Scruff and Alexander Nut. The set is on for hours, so they settle in – with Fatima sat on the stage in her typical black and white garms, and Mr. Scruff’s cartoon visuals on behind, they buckle up and get stuck in. As you can imagine, it’s an eclectic session with Fatima singing vocals over any track she fancies. They end up on “expensive shit” by Fela Kuti which brings the world dance flavor they were doing to a nice peak, before everyone heads over to the beach one more to stare at some more stars on their way to the boats that will take us to Barbarellas. Man of the night in this crazy cove has to be Catching Flies, who delivers a much higher tempo set full of steel drums and tin sounds. Some classics in there and they keep us going. After that, world sounds come together as we hear a special grade of south American and African dance music that keeps everyone going until 6am.

Sunday comes, and with it a cheeky trip to lake Krka and its waterfalls. We manage to swim behind the barriers and under the ginormous falls. We find a little cave there and we nestle in under the plants…it has a space for us. Just for us. We may have sat there for hours, just smiling at our cave…Until it was time to go and drive the short way back over the arching mountains and bridge with bungee jumpers and most of all the sea and the purple sky. No need to talk at this point. It’s Sunday and, like I said, it’s purple. Nina Simone playing in the car shows us the way home and we arrive at the festival to see Slum Village perform some of their seminal hip hop tracks and the final drum and bass sets from LTJ Bukem, DJ Marky and MC Stamina. The latter’s name is no coincidence, as by Sunday night mine had gone. But as I hovered over to get my energy fix from those honey roasted chicken wings, an old face calls me over… “BobbaFatts on in the small tent”. A tiny hidden away gem of a tent, and there he is, and oh, there’s everyone from the boat the day before going insane. He announces he and Mo Fingaz are closing things at Baraberallas and when it comes to 6am, I have to thank that BobbaFatt man for perhaps having a twin – or triplets? – but also being everywhere and smashing it every time. Tisno, Soundwave until next year. Toodles. 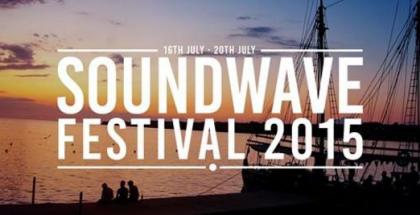