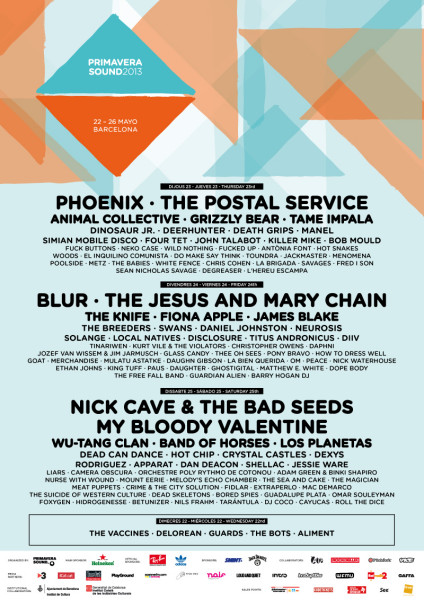 NICK CAVE & THE BAD SEEDS, PHOENIX, MY BLOODY VALENTINE, THE POSTAL SERVICE AND BLUR WILL BE IN THE LINE UP OF PRIMAVERA SOUND 2013

Primavera Sound reveals the names that will play at its thirteenth edition that will take place from the 22nd to 26th May in Barcelona. The British band Blur, the only name to be announced so far, will be joined by the duo The Postal Service in their surprising comeback, the Reid brothers fronting The Jesus And Mary Chain, Nick Cave at the helm of one of the best oiled machines of cult rock: The Bad Seeds, the French band Phoenix, that will present their long awaited new album, and the return to the festival of My Bloody Valentine, the band fronted by Kevin Shields which, by that time will already have released the follow up to the mythical “Loveless”.

The long list of big names doesn’t end there. Tame Impala, authors of the most critically acclaimed record of 2012, the New York crew Wu-tang Clan celebrating the twentieth anniversary of their original formation, the Granada band Los Planetas, that will play their famous “Una semana en el motor de un autobús” integrally, Animal Collective and Grizzly Bear, two bands whose careers once had a lot in common, have now created their own very different universes, the enigmatic The Knife in one of their rare performances, the Singer songwriter Fiona Apple, the Americans Band Of Horses and the British artist James Blake.

And as if this were not enough, the festival will offer the chance to see for the first time in our country the resurrected musician from the sixties Rodriguez and Dexys, the band fronted by Kevin Rowland (formerly known as Dexys Midnight Runners), to check out the excellent form of American bands such as Deerhunter, Dinosaur Jr., Local Natives and Crystal Castles and to enjoy the full-on energy of two bands whose common denominator is the guitar: Neurosis and Swans. The eighties perspective of Solange, the integral performance of “Last Splash” from The Breeders, the visit of the cult genius of Daniel Johnston, the interactive live performance of Dan Deacon and the now faithful Shellac will also be part of this luxury line up.

As always Primavera Sound keeps an eye on the local scene and, as well as the presence of Los Planetas in Parc del Fòrum, we will be able to see the Barcelona band Manel presenting their third record, John Talabot, our most internationally well known musician, the surrealist tinged pop of the Mallorca band Antònia Font, El Inquilino Comunista, historical band from the 90s, the powerful sound of Toundra from Madrid, Pony Bravo and Guadalupe Plata from Andalusia, Extraperlo’s elegant pop, the presentation of The Suicide Of Western Culture’s second album, the experimentation of Betunizer and other artists of the moment such as La Bien Querida, Tarántula, Fred I Son, La Brigada, The Free Fall Band, Hidrogenesse and L’Hereu Escampa.

Dance music and electronic pop will, as always, have their place at the festival.  The sound adventures of Kieran Hebden with his band Four Tet, the new British house sensation Disclosure, Hot chip’s superlative pop and the overwhelming live performance of Simian Mobile Disco are the main draws in this section.  We will also be able to see a special 80s set by Jackmaster and listen to the revisited italo disco from The Magician or kings of Californian daytime disco Poolside, along with Daphni the new Project from Dan Snaith (Caribou).

If anything has characterised Primavera Sound since the beginning it is its eclectic perspective and this will also underpin the 2013 edition.  The festival looks towards Africa and the Near East, with visits from the Ethiopian musician Mulatu Astatke, the influential band from Mali Tinariwen, the Afro beat from the Orchestre Poly Rythmo De Cotonou and the Syrian artist Omar Souleyman.

As well as the main programme, that will be performed across eight stages (including the Auditori), the Parc del Fòrum will be the site of other activities such as the record fair, traditional meeting point for national and international independent labels, the touring concert poster show Flatstock, that is coming back after the success of last year, and the children’s activity minimúsica, that will host a handful of concerts in which the bands adapt their repertoire for the little ones.

Primavera a la Ciutat continues with the same challenge as always, finding new ways of bringing music closer to all audiences.  This year its headquarters will be in the Parc del Fòrum itself, where on Wednesday 22nd May, the opening day, there will be concerts by The Vaccines, Delorean, Guard, The Bots and Aliment totally free of charge.

Primavera a la Ciutat will also put on other activities such as Primavera al Parc, Primavera als Clubs and the screening of music documentaries by Beefeater In-Edit.

Primavera Sound welcomes Heineken® as their main sponsor. The festival and the brewery pool their resources and their experience to make this edition memorable.

The price of the full festival ticket is 160€ until 6th February. The sales points are Codetickets, Atrapalo, Ticketscript, Ticketmaster, Seetickets, Fnac France through the web and Primavera Sound’s Facebook.

The PrimaveraPro 2013 accreditation is also available at the price of 215€ until the 15th February.

The concerts on the 22nd May in the Parc del Fòrum will be free.

YOUR MOVE, RAINCLOUD – This is what’s left over from nothing that’s happened